Lately, after Sri Lanka became bankrupt, numerous messages have been circulating on social media claiming that Malaysia will go bankrupt next.

You might have seen them on FB, Insta, and Tik Tok or forwarded WhatsApp messages that we are doomed next.

But do these claims hold? Let’s examine the numbers.

How does a country go bankrupt?

It happens when their country’s economy collapses with no or zero cash reserve, exports and economic activities.

In Sri Lanka’s case, due to rampant corruption, economic mismanagement and meddling with the constitution by the ruling elite had led Sri Lanka to bankruptcy, affecting millions of citizens in the island nation.

They are now facing fuel and food shortages, rampant inflation and endless political turmoil. Sri Lanka is now drowning in its worst-ever economic crisis and pleading for other nations’ help to keep its people afloat.

Following a 70% drop in foreign exchange reserves since January 2020, Sri Lanka has struggled to pay for essential imports such as food and fuel. Its foreign currency reserves fell to US$2.31 billion in February, a fall of US$779 million from December 2021 through January 2022.

What led to these dire situations is a series of unfortunate events.

Here are some YouTube videos which explain the crisis in detail:

Why Sri Lanka is Collapsing: the Coming Global Food Crisis

How One Powerful Family Destroyed A Country

To summarise the videoes, some key factors diagnose the health of a nation’s economy. Let’s have a look.

Malaysia, an export nation, has a consistent trade surplus, while Sri Lanka has a trade deficit. 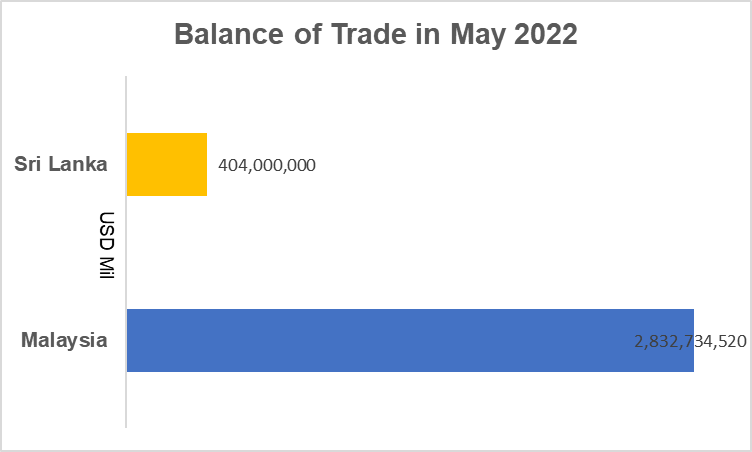 Moreover, Malaysia’s exports are varied, well diversified and highly valued, mainly contributed by the Electric and Electronics industry, Oil and Gas and palm oil. Sri Lanka’s exports, on the other hand, are highly dependent on the low-value clothing and agriculture industry, and their GDP heavily relies on tourism.

Even though Malaysia has gone through a series of economic and financial recession crises before, it has never failed to pay interest and mature debts, proving Malaysia’s reputation and capability as a debtor with a good repayment record.

Article 98 (1) (b) of the Federal Constitution stipulates that the Government must prioritise debt charges over other operating expenses. The External Borrowing Act 1963 provides that offshore borrowings cannot exceed RM35 billion. As of the end -of June 2022, this debt amounted to RM29.4 billion.

The Provisional Measures for Government Financing (Coronavirus Disease 2019 (COVID-19)) (Amendment) Act 2021 stipulates that the statutory limit of Government debt cannot exceed 65% of GDP. At the end of June 2022, statutory debt accounted for 60.4% of GDP.

In addition, 97% of the Federal Government’s total debt is in the Ringgit denomination. This reflects prudent debt management as exposure to foreign exchange risk is minimal.

The big answer is NO.

However, as I explored more about the circumstance which led to the Sri Lanka crisis, I couldn’t help noticing parallels between the political and economic situation in Sri Lanka and Malaysia. Sri Lanka, it seems, is showing us where we could be headed if we don’t address similar structural problems in Malaysia.

We can avert the crisis Sri Lanka faces if we are willing to learn the lessons the island nation offers.

Therefore, we, the Rakyat should exercise our rights by electing competent leaders at the next general elections to ensure Malaysia does not go down the path taken by Sri Lanka.